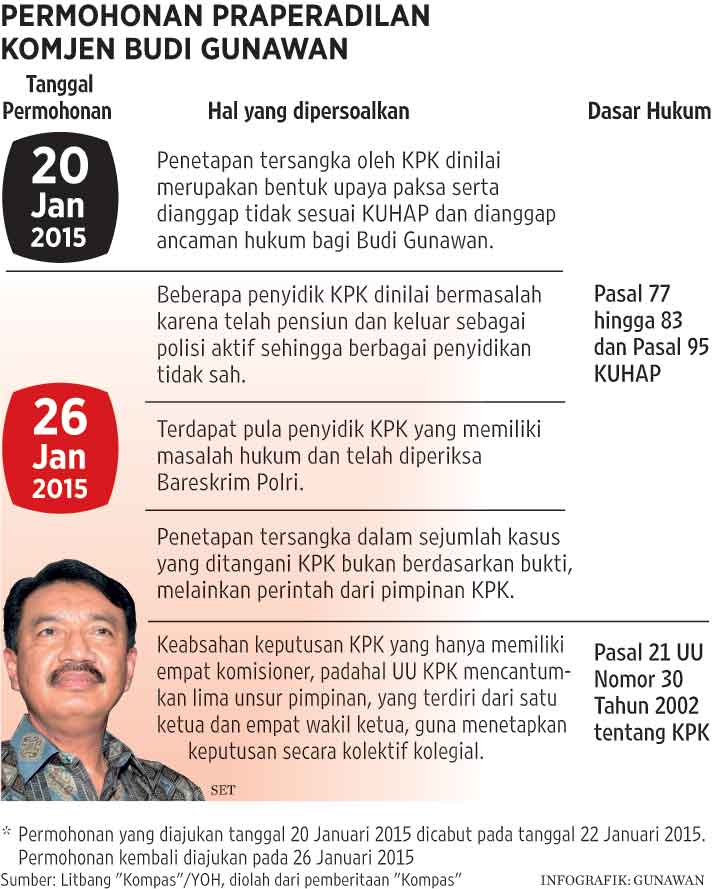 "I have not heard any such thing and the President has not yet made that statement," Setya said at the Parliament building here on Wednesday.

He noted that the House of Representatives (DPR) will appreciate whatever decision the President makes with regard to the National Police chief as it is his prerogative.

He added that during a working meeting with the President at the State Palace on Monday (Feb 2), the DPR reported the mechanism of police chiefs election.

"The DPR has followed the mechanism and procedures based on the law. Therefore, we fully leave it to the President," he stated.

Regarding the conflict between the Corruption Eradication Commission (KPK) and Police, the House Speaker stressed that the two institutions should respect the supremacy of law.

According to Setya, though both institutions might have their own reasons, they should respect each other, as both are legal institutions.

"KPK and Police must be respected. Both must have their respective reasons related to concerned parties," he remarked.

KPK has named National Police chief candidate Budi Gunawan suspect in a case involving suspicious transactions during his tenure with the career development division at the National Police Headquarters from 2003 to 2006 and other offices.

Following Budis indictment, the National Police (Polri) named KPK deputy chairman Bambang Widjajanto suspect for allegedly prompting a witness to give false statements in a regional election dispute case in a court in 2010, when he was a lawyer.

On Wednesday, an Independent Team, which was formed by President Joko Widodo to provide recommendations to settle the KPK-Polri conflict, submitted its report.

The team has given five recommendations.

One of the suggestions is not to install Commr. Gen Budi Gunawan as National Police Chief.

The Independent Team, which has nine law experts, former chiefs of police and KPK, and other respected leaders, has submitted a five-point recommendation report to the President.

The first suggestion is that the President should be firm that any law enforcement official who is a suspect in a case should resign in order to protect the reputation of law enforcement agencies such as police and KPK.

Second, the President should not install a police chief candidate who has been a suspect in a case.

Third, the President should stop all alleged attempts of criminalization of officials of law enforcement agencies, both police and KPK, and the people in general.

Fourth, the President should order police and KPK to abide by their respective ethical codes.

Fifth, the President should reaffirm his commitment to corruption eradication and law enforcement in order to meet the public expectation.

Chairman of the team Syarfii Maarif said Joko Widodo had not initiated the move to pick Budi as the police chief candidate.

Maarif, however, stopped short of giving a name saying, "you know it. It is no secret."