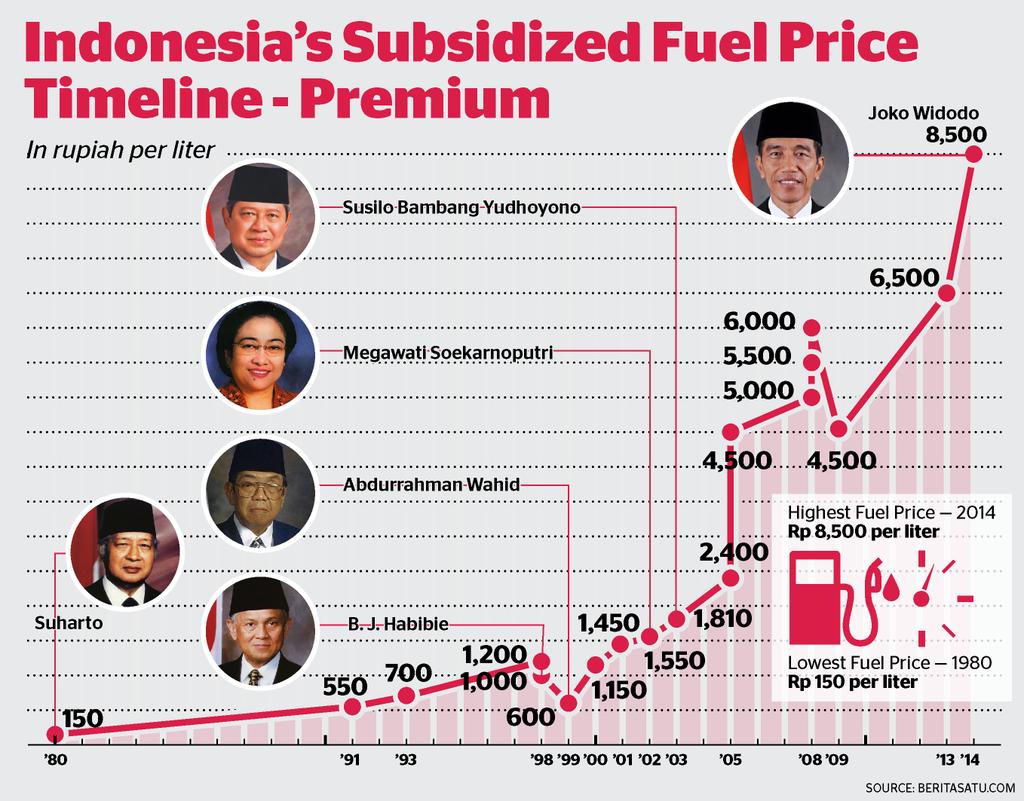 Indonesia will cap the diesel subsidy and scrap aid for gasoline beginning tomorrow, the biggest changes to a decades-old system that has tied up budget funds and bloated energy imports.

This marks the second act in efforts by Widodo, known as Jokowi, to fix the country’s energy subsidy system, having raised fuel prices in November less than a month after he took office. While Indonesia is still behind India and Malaysia, which scrapped government spending for keeping diesel and gasoline prices low earlier this year as oil costs plunged, today’s announcement moves Southeast Asia’s biggest economy closer to a similar dismantling.

“A lot of credit must go to Jokowi, he’s upping the game to the point of changing the game by capping the upside to subsidies,” said Vishnu Varathan, a Singapore-based economist at Mizuho Bank Ltd. “This is what we were looking for. A market-based price mechanism would be very desirable and I think global oil price trends have allowed them to move in that direction a lot more smoothly and a lot sooner.”

The changes for January can take effect tomorrow without parliamentary approval under the current budget, Minister Djalil said. The new system will need to be sent to the legislature for approval under the 2015 budget, due to be submitted in first week of January, he said.

“We will bring this to the parliament and God willing, parliament will agree with the government” because it will save a lot of money, Djalil said.

Authorities will announce retail diesel and gasoline prices on a monthly basis and they will fluctuate in line with international prices, the government said.

“This is a big deal,” Oversea-Chinese Banking Corp. economist Wellian Wiranto wrote in a report. “Subsidies were supposed to eat up more than 13 percent of total expenditure in 2015 originally, but now whittled down to a mere 1 percent. The country can now look ahead to how best to improve living standards, rather than look over its shoulders all the time for oil price risk.”

Jokowi’s fuel subsidy shake-up to free funds for development spending, along with a clean-up of the energy industry, is encouraging some investors. Indonesia’s bonds advanced last week, with the 10-year yield falling by the most since October, on optimism the government would move forward with plans to curb fuel subsidies. The rupiah rose 0.1 percent today to 12,436 per dollar taking its gain over the past two weeks to 1.8 percent, according to prices from local banks.

Indonesia has been subsidizing fuel since the first oil price shock in the 1970s and kept prices at less than $0.20 per liter until 2005, according to a World Bank report published in March. Dismantling the subsidy program is a political hot potato — protests accompanied past price increases and riots spurred by soaring living costs helped oust dictator Suharto in 1998.

“It probably makes more sense to have the fixed fuel subsidy because it’s more transparent, considering the uncertainties about oil price after its recent slide,” Gundy Cahyadi, an economist at DBS Group Holdings Ltd. in Singapore, said before the announcement. “It’s probably going to be easier for the government to eventually do away with fuel subsidies altogether once they move to the fixed subsidy.”

Jokowi increased the price of gasoline and diesel by 2,000 rupiah per liter on Nov. 18, prompting the central bank to raise its benchmark interest rate to guard against inflation. Some 276 trillion rupiah was earmarked for fuel subsidies in the 2015 budget prior to the price increase, equivalent to 13.5 percent of total spending.