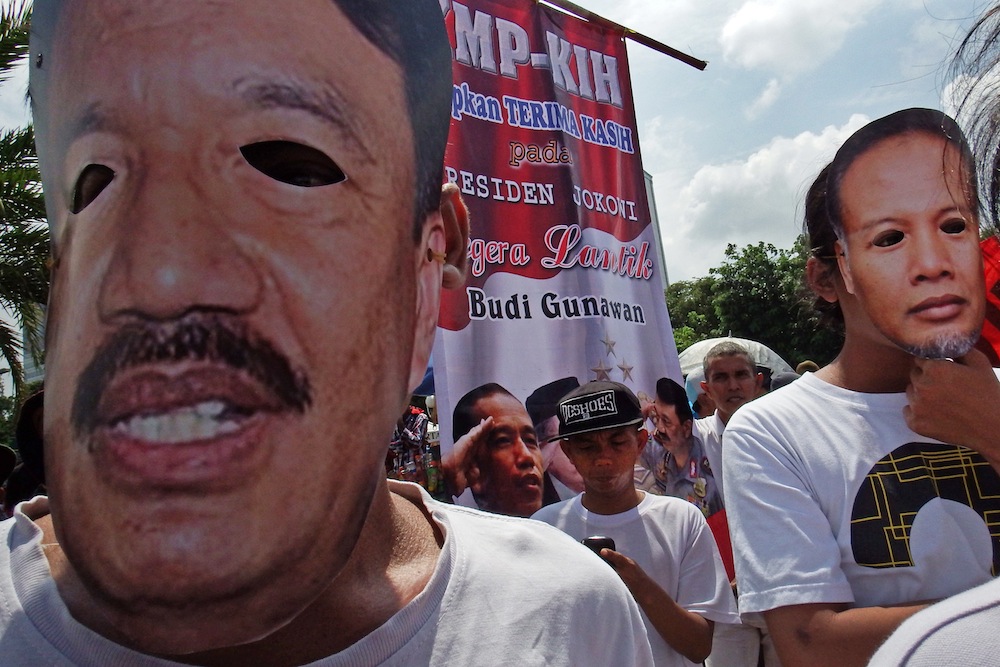 Jakarta. The South Jakarta District Court’s decision to revoke the suspect status of President Joko Widodo’s candidate for National Police chief, Comr. Gen. Budi Gunawan, has renewed calls for the president not to proceed with Budi’s inauguration. But Joko’s moves over the past month suggest he is likely to go against the public sentiment.

Corruption Eradication Commission (KPK) chairman Abraham Samad reveals for the first time that Budi has been on the antigraft body’s radar over indications that he may have laundered at least Rp 54 billion ($4.24 million) through his personal bank accounts between 2003 and 2006.

The KPK notifies Joko that it has “red-flagged” Budi, after the president includes his name in a list of potential cabinet members. The KPK advises Joko against appointing Budi to a ministerial post, Abraham later says.

Despite the warning from the KPK, Joko goes ahead and names Budi his sole candidate to become National Police chief, prompting an outcry from activists, political analysts and members of the public.

The KPK names Budi Gunawan a corruption suspect but delays making any announcement until the next day.

Joko refuses to drop Budi’s nomination in light of the corruption charge, saying: “I must respect the political process at hand,” referring to a confirmation hearing scheduled the next day by the House of Representatives’ Commission III, which oversees legal affairs.

House Commission III holds — and quickly concludes — a confirmation hearing for Budi Gunawan, ultimately approving his nomination for a floor vote at a House plenary session. Joko says that he will await the result of the plenary vote before making his next move.

All parties at the House plenary, with the exception of the Democratic Party, endorse Budi Gunawan to become the next police chief.

Joko announces he will postpone the appointment of Budi as police chief due to the legal troubles faced by the three-star general: “Because Commissioner General Budi Gunawan is facing a legal process, I believe it is necessary to delay his appointment. So it is delayed, not canceled. That needs to be underlined.”

Joko says he will wait for the South Jakarta District Court to issue a ruling on a pretrial motion lodged by Budi against the KPK’s charge.

Officers from the National Police’s detectives unit arrest KPK deputy chairman Bambang Widjojanto over a cold case police had dropped in 2010. Bambang, who is handcuffed while about to take his daughter to school, is charged with compelling witnesses to commit perjury in a 2010 regional election dispute in which he represented the candidate who was declared the winner of that election.

He is named a suspect and released from custody in the early hours of Jan. 24.

Joko summons deputy police chief Badrodin and KPK chief Abraham to the Bogor Palace, where he asks both sides to “maintain strong ties.”

Despite the instruction, the police continue to dig up cold cases against the KPK leaders, including Abraham and deputy chairmen Adnan Pandu Praja and Zulkarnain.

Joko summons several prominent political figures, including former KPK commissioners, to the State Palace to form an independent team tasked with providing insight on the debacle.

The South Jakarta District Court delays hearing the pretrial motion lodged by Budi for a week after KPK representatives fail to show up.

The independent team recommends Joko not to proceed with inaugurating Budi. Joko, however, says he will make an announcement the following week, saying “There are things I must sort out first,” but declining to say what those things might be.

As of Feb. 16, Joko has made no announcement regarding Budi’s nomination.

The South Jakarta District Court begins hearing Budi’s pretrial motion to have the charges against him dropped.

The court rules in favor of Budi.