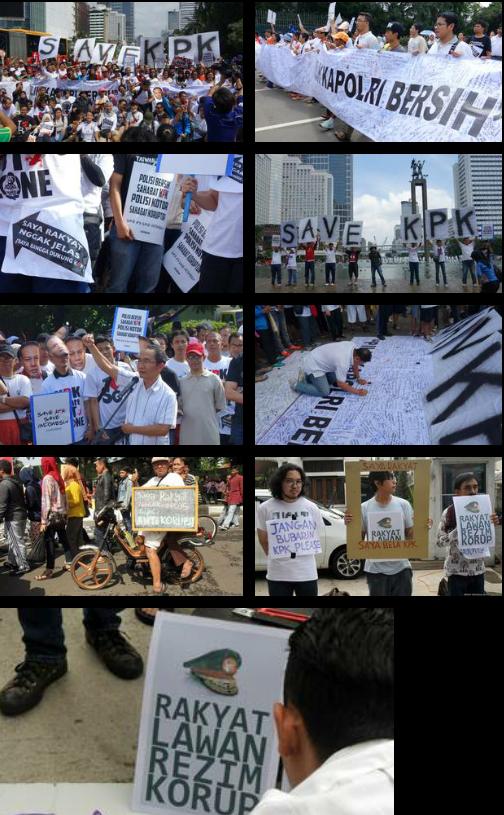 Protests are mounting against what some observers increasingly believe now to be systematic efforts to incapacitate the Corruption Eradication Commission — Indonesia’s last bastion of hope against systemic corruption — which seems to have been cast adrift now with only the public as its faithful ally.

Allegations of attempts to “criminalize” the antigraft body, known as the KPK, became louder over the weekend as a second deputy chief of the commission was suddenly reported to police over an old case.

“We have brought data of the crimes he committed in Berau. He stole from a family company,” the company’s lawyer, Mukhlis Ramlan, said shortly before filing the report to the National Police’s criminal investigation unit at the police headquarters in South Jakarta on Saturday.

Mukhlis accused Adnan, who served as a lawyer for Desy in 2006, of illegally taking over 85 percent of shares in the company while the management was involved in a family feud.

Adnan on Sunday denied the allegations, calling them an attempt to undermine the institution he now works with.

“Now it’s my turn to be reported to the police,” Adnan said in a speech before a large crowd that gathered to voice their support for the KPK on Jalan Sudirman in Central Jakarta on Sunday, as quoted by Tempo.co.

“If I must go through what B.W. [another KPK deputy chief, Bambang Widjojanto] did, then that’s the cost of fighting corruption in Indonesia,” he added.

Adnan was reported to police just a day after Bambang’s arrest on Friday in connection with a refiled perjury complaint dating back to 2010. That case had been dropped by the police after the Constitutional Court ruled on the regional election dispute at the center of the case, but was recently refiled by Indonesian Democratic Party of Struggle (PDI-P) politician Sugianto Sabran.

Bambang was given a conditional release several hours later, after widespread public protest against his arrest and calls for support for the KPK.
Adnan, who joined the KPK in 2013, alleged that the old case against him was dug up to weaken the KPK, noting that he had already clarified the matter during his vetting before the House of Representatives.

The two old cases were filed out of the blue against the two KPK leaders following the antigraft body’s naming of police general Comr. Gen. Budi Gunawan as a suspect over his suspiciously hefty personal bank accounts.

The suspicion was first flagged by the government’s anti-money-laundering watchdog, the Financial Transaction Reports and Analysis Center, or PPATK, in 2010. The KPK also reportedly issued a red flag against Budi when President Joko Widodo mulled recruiting him as a member of his cabinet prior to his announcement of the cabinet lineup in late October last year.

It was only early this month, however, that the KPK decided to name Budi a suspect, alarmed by the president’s nomination of him as the sole candidate for National Police chief.

But despite the KPK’s announcement of Budi’s suspect status earlier this month, Joko did not retract his nomination and the House nearly unanimously — with the Democratic Party as the only exception — endorsing Budi’s nomination just a day after he was charged. Only after a public backlash did Joko finally say he was postponing, though not scrapping, Budi’s nomination.

Critics have lambasted the president for allegedly bowing to the pressure from his party patron, PDI-P chairwoman and former president Megawati Soekarnoputri. Budi is known to be close to Megawati, having served as her security aide during her presidency from 2001 to 2004.

Photos of him in intimate poses with the current Miss Indonesia, Elvira Devinamira, began circulating on the Internet as soon as Budi’s suspect status was announced. Most experts have dismissed the pictures as doctored, although less-knowledgeable people have accepted them as genuine.

In the past week, PDI-P acting secretary general Hasto Kristiyanto, a close adviser to Joko, accused Abraham of naming Budi a suspect out of spite.

Hasto claimed that Abraham had a personal vendetta against the party for its decision not to support his reported bid to be picked as Joko’s running mate in last year’s presidential election.

Antigraft activist Adhie Massardi said on Sunday that the whole mess was not limited to the long-running hostilities between the KPK and the police but stemmed from the PDI-P’s fears that its chairwoman would be the target of a KPK probe.

Adhie accused the PDI-P of trying to weaken the KPK and criminalize its leaders in the wake of an investigation into alleged irregularities in the issuance of letters of discharge for Bank Indonesia Liquidity Support (BLBI) debtors in 2002.

Adhie, from the Clean Indonesia Movement, said the PDI-P’s elites were concerned that the probe would settle on Megawati, who as president during that period approved the issuance of the letters.

A total of Rp 144.5 trillion ($12 billion) of funds were distributed to 48 banks under the BLBI program during the height of the Asian financial crisis in 1997-98.

Virtually none of the funds was repaid, with many bank executives absconding with the money. The Supreme Audit Agency (BPK) estimates the state’s losses from the fiasco at Rp 138.4 trillion.

The KPK announced in April 2013 that it launched an investigation into the BLBI case; in August last year, Abraham said the KPK would summon Megawati for questioning, though it has not done so yet.

“This [situation] has something to do with the KPK’s intensifying probe into the BLBI letters of discharge,” Adhie told a public discussion in Jakarta.
“There is a suspicion that if the KPK is allowed [to proceed with the probe], it will target Mega. There’s speculation that the KPK is being undermined so it can’t summon Mega and name her a suspect. Rumor has it that the PDI-P is using the police to fight the KPK,” he said.

With the PDI-P making no secret of its hostility toward the KPK — with the PDI-P-backed president showing little support for the antigraft body, and Hasto, the party’s number two, accusing its leader of having an axe to grind — and politicians from other parties largely silent on the whole affair, the public appears to be the only font of support for the beleaguered agency.

Critics have accused the House of having weak, if not zero, political will to support the KPK, with many legislators having been among the targets of the KPK’s antigraft war. Legislators from both the pro-government Awesome Indonesia Coalition and the opposition Red-White Coalition — who have agreed on virtually nothing since their inauguration in October — found common ground on endorsing Budi’s nomination despite his suspect status; some legislators have even threatened Joko with  impeachment for failing to follow through on inaugurating Budi.

Observers, including Adhie, have suggested that Joko form an independent fact-finding team consisting of law experts to scrutinize the thinly veiled criminalization of KPK leaders, similar to the team set up by former president Susilo Bambang Yudhoyono in 2009 when police named then-KPK deputy chairmen Bibit Samad Riyanto and Chandra M. Hamzah as suspects. With the help of the so-called Team of Eight, the charged were found to have been trumped up, and the police general behind them, Susno Duadji, was later tried and convicted on two separate corruption charges.

On Sunday night, Joko held a press conference at the State Palace in Central Jakarta to address the issue. But although he trotted out a group of prominent legal experts to the televised event, the president mentioned nothing about forming such a fact-finding team.

He again issued a statement that critics said lacked any substance and that feigned to be neutral but instead steered clear of the core of the problem, which was the series of retaliatory attacks against the KPK — the most highly regarded government institution in Indonesia — by the police, which vies with the House each year for the ignominious honor of being the most corrupt public institution in the land.

“The legal process against both KPK and police personnel must be made clear as day, must be made transparent,” the president added, not elaborating on any real measures to clear up the situation.

Jimly said they had been asked to provide counsel to the president regarding the conflict between the KPK and the police but that there was no immediate plan to set up a fact-finding team.

“We’ve been invited here personally. There’s no decision yet to make us a formal team, but we’ve been asked to tentatively give advice concerning this matter,” Jimly told the same press conference.