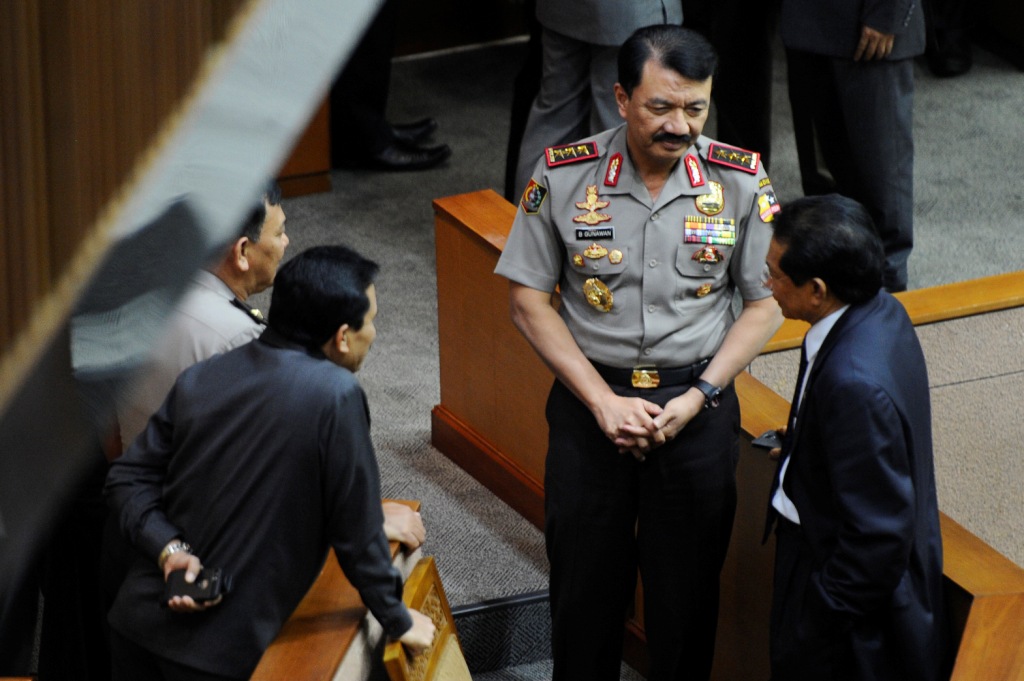 The House of Representatives will likely endorse President Joko Widodo’s latest pick for National Police chief and calls for impeachment against the president might be no more than a strategy for political horse-trading, experts say.

The move caused a stir in the House, which endorsed Budi’s nomination despite the Corruption Eradication Commission (KPK) having named him as a corruption suspect.

Some legislators have demanded an inquiry while others called for Joko’s impeachment, accusing the president of insulting the legislature.

But Lucius Karus of the Concerned Citizens for the Indonesian Legislature (Formappi) said getting parties from both the pro-government Awesome Indonesia Coalition (KIH) and the opposition Red-White Coalition (KMP) to show equal support for Badrodin “will not be difficult.”

“It all comes down to how Jokowi lobbies the leaders of each political party,” Lucius said on Tuesday, referring to the president by his popular nickname.

But party elites might want something in return, the Formappi senior researcher warned, which could range from more seats in Joko’s cabinet to ensuring that law enforcers stay out of cold cases involving them.

The organization’s move to officially declare Budi a suspect prompted a seemingly retaliatory backlash from the police, who launched a series of dubious probes into the KPK commissioners based on cold cases, some of which are nearly a decade old.

Former KPK head Taufiequrahman Ruki, who chaired the anti-graft body from 2003-2007, will fill in for Abraham, while Johan Budi will  serve as interim deputy to replace Bambang. Johan is a former KPK spokesperson and current deputy for graft prevention.

Indriyanto Seno Adji, a criminal law professor at the University of Indonesia, will take up the post left vacant by Busyro Muqoddas, a deputy chairman whose term ended in December and was not renewed.

The president “realizes that he has tremendous power over the parties. He knows each party’s strength and weaknesses and can easily exploit them,” Andar said.

Joko has repeatedly met with Red-White Coalition leaders Prabowo Subianto and Aburizal Bakrie, in a move that can keep the Awesome Indonesia Coalition under the president’s control.

“[Awesome Indonesia] must not hastily challenge [Joko] because at any time the Red-White Coalition is ready to take their spot,” Andar added.

Nico Harjanto, executive director of think-tank Populi Center pointed out that Joko has another weapon at his disposal: strong public support.

“Should the House refuse to support the president’s policy, they will face the public’s wrath,” Nico said.

Most of the parties in the legislature, including Joko’s political vehicle, the Indonesian Democratic Party of Struggle (PDI-P), have yet to decide whether they will accept the president’s decision or  exercise their right to launch an inquiry.

So far, politicians have aired conflicting reactions about Badrodin’s candidacy and plans for a possible probe.

State Secretary Pratikno gave assurances that the president has not taken threats of impeachment “too seriously.”

“The president feels that he does not need to respond [to impeachment remarks],” he sai, adding that Joko is also ready to face a House inquiry.

“This is for the good of the people. The president has to hear and respond to the people’s demands,” he said of Joko’s decision to axe Budi’s police chief candidacy.

The cancelation came nearly six weeks after the president announced he had chosen the police general to be the country’s top cop.

The move to renege on the controversial decision, particularly the timing of it, seemed calculated, analysts noted; the announcement was made just days after the House moved into recess.

Joko now has one month before the House is back in session, on March 23, to lobby party leaders both in his coalition and opposition parties.

Political observer Aleksius Jemadu of Pelita Harapan University suggested that Joko may have considered Budi an unfit candidate for National Police chief all along and that his indecision was a strategy to defy elites within the PDI-P.

Budi was widely believed to have been pushed onto the president  by PDI-P chairwoman Megawati Soekarnoputri, whom the police general had served as a security aide during her brief stint as president from 2001 to 2004.

“Given the fact that he announced Badrodin’s nomination during the House’s recess period indicated that he never intended to [inaugurate Budi],” Aleksius told the Jakarta Globe.

Joko has previously said he would wait for the South Jakarta District Court to issue a ruling on a pretrial motion lodged by Budi to have his suspect status revoked.

Aleksius sees Joko’s decision to drop Budi’s nomination despite the court ruling as further evidence that the president is refusing to bow down to political pressures from his inner circle.