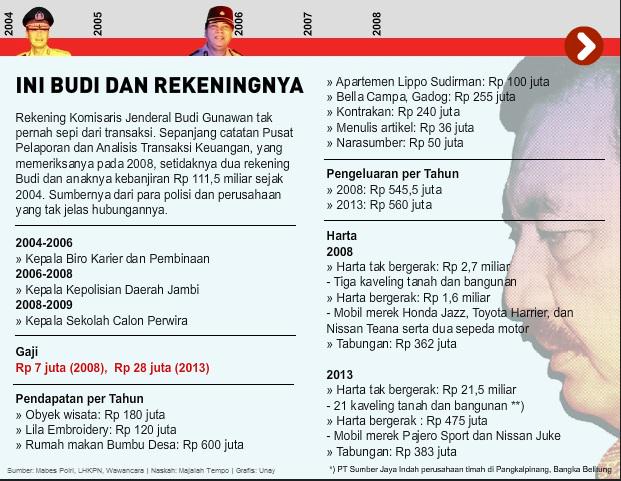 The National Police have indicated they will go after Corruption Eradication Commission investigators who declared a former police chief candidate a graft suspect.

Comr. Gen. Budi Waseso, head of the detectives division, claimed police had collected sufficient evidence to prove the anti-graft body, or KPK, had broken the law after a South Jakarta court ruled it was not authorized to name Comr. Gen. Budi Gunawan a corruption suspect.

“Even without the pretrial motion ruling we would have enough to take legal action against the KPK officials; we have proof that they abused their authority,” Budi Waseso told reporters on Friday.

He added that police were in possession of documents the KPK used against Budi Gunawan, which he said could prove that the KPK had manipulated evidence in order to declare him a suspect.

The chief detective dismissed concerns that his latest move against the KPK may reignite the long-standing conflict between the two institutions, saying, “The media created the impression that we are at war with each other.”

He then hinted that police investigators would not pursue the corruption allegations against Budi Gunawan, after the Attorney General’s Office handed over the case to the National Police.

“The PPATK didn’t make a big fuss about [the bank accounts] at the time, so why should they be a problem now?” he questioned.

The National Police were accused of retaliating against the KPK and the PPATK by threatening senior officials from both institutions with criminal charges. They succeeded in charging two KPK leaders who are now suspended from office.

The KPK relinquished its investigation on Budi Gunawan to the AGO following the South Jakarta court ruling, an sign that the antigraft commission had folded to the pressure brought by the police.

The AGO in turn transferred the case to Budi Waseso — who once served under  Budi Gunawan at the National Police institute and often referred to himself as “anak buah B.G.,” or B.G.’s protege.

Miko Ginting, a researcher at the Center for Legal and Policy Studies (PSHK), slammed the AGO’s move, arguing it would preclude a proper investigation.

“The case should never have been transferred. Think of the massive conflict of interest and how the AGO has mishandled it so far,” Miko said, urging the KPK’s current leadership to file an appeal and challenge the pretrial ruling.

The researcher also rejected the idea of naming Budi Gunawan the next deputy chief of the National Police “or any other official position because of the ongoing legal process.”

“To appoint Budi [Gunawan] to a position in any public office would be unethical,” Miko added.

Meanwhile, Budi Waseso said the investigation against his former mentor would be transparent and speedy.

“My team is now examining the documents submitted by the AGO,” he said. “We will be transparent. We will stage a joint examination with the KPK and the PPATK to evaluate the case together.”

The House has scheduled a confirmation hearing with Badrodin next Wednesday. His nomination will then have to go to a floor vote on Friday.

The KPK and the PPATK cleared Badrodin of any red flags last Thursday — a move that was once again considered a sign of submission by the antigraft commission to the police.

Both the KPK and PPATK claimed they had not found any indication of Badrodin’s involvement in any graft case — despite the fact that he, along with Budi Gunawan, were among the list of police generals found to have suspiciously “fat” bank accounts in 2010.

PPATK chief Muhammad Yusuf told the House that the Rp 3 billion ($232,000) in transactions through Badrodin’s accounts at the time “were from legitimate sources and could be accounted for.”

KPK interim chairman Taufiequrachman Ruki added, “There have been no complaints made against Badrodin Haiti.”