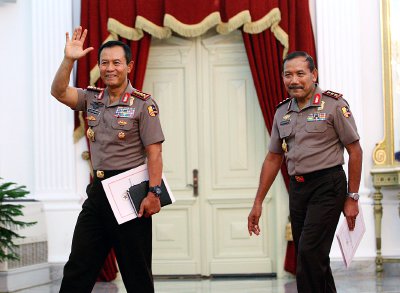 The House of Representatives has signaled it may soon begin to vet the country’s next police chief, indicating a possible compromise in a standoff after the president’s previous nominee was scuppered over corruption concerns.

That decision appears at odds with the House’s earlier stance.

On Monday, eight of the 10 political parties in the House demanded President Joko Widodo explain his decision to withdraw Comr. Gen. Budi Gunawan’s nomination as National Police chief as a condition of agrement to vet Badrodin instead.

Agus’s remarks came on the same day that House Commission III staged a hearing with Badrodin, during which Golkar Party legislator John Kenedy Azis (no relation to the Hyannis Port Kennedys) asked the acting police chief about the status of a complaint lodged by several Golkar legislators loyal to incumbent chairman Aburizal Bakrie.

The complaint by Aburizal loyalists alleges that Justice Minister Yasonna Laoly abused his authority by recognizing Agung Laksono as the party’s official leader amid a bitter leadership dispute.

Aburizal’s camp is also filing a complaint against Agung’s supporters for forging signatures in a congress in Ancol, North Jakarta, last December that elected Agung as chair.

The Ancol congress was staged to rival another Golkar congress in Bali days earlier that elected Aburizal for a second term.

“We are trying to prove that there is indeed an act of forgery. Actually, we already have potential suspects. Currently there are two and there could be more in the future,” he said, adding that police were still trying to obtain the original petition that paved the way for Agung’s congress in Ancol.

Aburizal’s supporters claim that the petition used a forged Golkar stamp and included members of other parties, as well as a Golkar politician who has been dead for several years.

Badrodin did not elaborate on what specific actions had been taken on the Agung faction’s complaint.

Experts have long predicted that legislators may use the National Police nomination for a political horse trade. The House is currently controlled by the opposition Red-White Coalition. With 91 seats, Golkar is the biggest opposition party and the split has proved to be of great interest for both the ruling coalition and the opposition bloc.