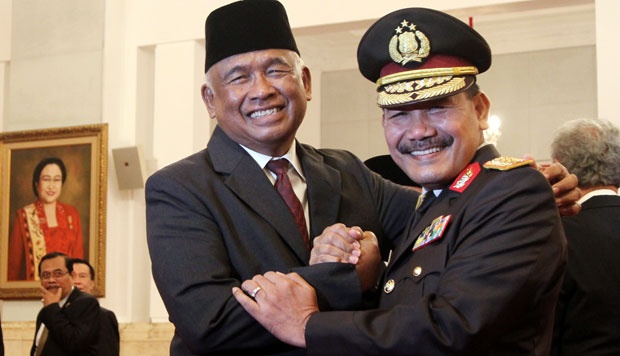 Taufiqurahman Ruki and Johan Budi were inaugurated to replace Abraham Samad and Bambang Widjojanto, respectively as chairman and deputy chairman of the Corruption Eradication Commission (KPK).

Abraham and Bambang were suspended after having been named suspects in old criminal cases in what observers say is an attempt to weaken the KPK as part of a conflict with elements within the National Police.

The new temporary KPK chief, Taufiqurahman, said that the agency would focus on unfinished graft cases and would not interfere with the police investigation of the agency’s former leaders.

“It is not our business [the investigation of ex-KPK chiefs], it is the National Police’s,” Taufiequrahman said.

Taufiqurachman was the KPK’s inaugural chairman, leading the agency from 2003 to 2007. Indriyanto is a legal expert from the University of Indonesia (UI). Johan is the KPK’s former spokesman and until Friday was its chief for corruption prevention.

Badrodin is Joko’s pick to become the next chief of National Police, the president announced this week, after his selection of Comr. Gen. Budi Gunawan — named a graft suspect by the KPK within days — sparked a wave of protest. In what observers have a called apparent retaliation for the naming of Budi as a graft suspect, the police soon started investigating a range of old cases brought against the entire KPK leadership.