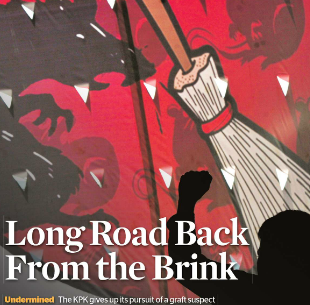 The Corruption Eradication Commission (KPK) says it will not seek a case review against a South Jakarta District Court pretrial ruling to have one of its highest-profile investigations to date annulled.

The court last month quashed on a technicality the decision made in January by the commission, known as the KPK, to charge Comr. Gen. Budi Gunawan, a nominee for police chief.

Legal experts and former KPK officials have urged the antigraft commission to seek a case review, similar to an appeal, to have the ruling thrown out, but KPK interim deputy chairman Johan Budi said on Wednesday that there was no point.

“We met with the Supreme Court’s chief justice, Hatta Ali, the other day, and he firmly stated that he could not intervene in the [district court] judge’s independence” in a pretrial motion, Johan said as quoted by Detik.

He added that Hatta had made clear he would not accept the KPK’s attempt to have the decision reviewed. “They will reject it. So why try?” he said.

The KPK had charged Budi with bribery and money-laundering, in connection with irregular transactions amounting to millions of dollars flowing through his personal bank accounts from 2003 to 2006.

But the judge hearing the pretrial motion filed by the police general, Sarpin Rizaldi, ruled last month that the KPK had no jurisdiction over Budi, whom he described as “not being a law enforcer” at the time of the alleged money laundering.

Legal analysts, though, point out that the court’s decision to revoke Budi’s suspect status was not a legally recognized move under the Criminal Code Procedures, or KUHAP.

Under the code, a pretrial motion is only authorized to hear technical aspects of an investigation, such as the processes leading to arrest and seizure of assets, and not weigh on the substance of the criminal charge itself, which can only be determined after the indictment of the suspect.

Analysts have also pointed to a recent verdict issued by the Purwokerto District Court in Central Java as a precedent for seeking a case review. In that case, a criminal suspect had filed a pretrial motion in a bid to have his suspect status revoked.

However, the judge denied his motion on the grounds that a pretrial hearing was not the right venue to seek to have one’s suspect status withdrawn.

But Johan said the KPK had already handed Budi’s case to the Attorney General’s Office and could not take it back.

Attorney General H.M. Prasetyo has already indicated his office will not pursue the case against Budi. The development has sparked anger from antigraft activists and officials and supporters of the KPK, which has a 100 percent conviction rate against every individual it has ever named a suspect throughout its 12-year history.

The Judicial Commission, the government’s watchdog for the judiciary, which has denounced Sarpin’s ruling, says Hatta’s refusal to hear a case review at the Supreme Court is also wrong.

“A judge must not say that; the court must accept all cases,” said commissioner Taufiqurrahman Syahuri.

“Only after the case is heard can [Hatta] say whether the review will be accepted or not. If [Hatta] indeed said no [to the KPK], this constitutes an ethical violation. However, I’m not sure that is what [Hatta] said.”

Speaking separately on Wednesday, interim KPK chairman Taufiequrachman Ruki said the antigraft commission would no longer prioritize the investigation into the embezzlement of bailout funds, known as BLBI, from the 1997-98 Asian financial crisis.

The KPK in 2013 questioned Rini Soemarno over the so-called release-and-discharge documents obtained by debtor banks, absolving them of all debts to the government — despite the face that most of them absconded with billions of dollars in taxpayer money.

Rini was at the time a deputy chairwoman of the Indonesian Bank Restructuring Agency (IBRA) and a member of the Committee for the Stabilization of the Financial Sector (KSSK). Today she serves as the minister for state-owned enterprises.

The release-and-discharge papers were issued by the IBRA based on a 2002 presidential instruction signed by then-president Megawati Soekarnoputri, who is closely tied to both Rini and to the current president, Joko Widodo.

The KPK, under now-suspended chairman Abraham Samad, had indicated last year that it planned to ramp up its investigation of the case, including that it might call in Megawati for questioning.

Ruki, who chaired the KPK during Megawati’s presidency and was appointed interim chairman of the KPK by Joko last month, to replace Abraham, said the KPK had “no target” of completing the BLBI investigation.

He added that his focus for now was to conclude 40 ongoing investigations at the KPK as well as forge better relationships with the National Police and the AGO, which have been severely strained since Budi was charged.

Ruki, a retired police general, is seen by many as a “Trojan horse” appointed by Joko to the KPK to further undermine it.

“The KPK is not only weakened now, but being destroyed from the inside,” said Julius Ibrani of the Indonesian Legal Aid Foundation (LBHI).

“The KPK has been occupied structurally by political interests.”

Since the KPK charged Budi on Jan. 13, the police have dug up a series of cold cases, some a decade old, against KPK leaders and investigators.

Police are pursuing 26 separate cases and have thus far charged two of the KPK’s four commissioners on three separate criminal cases, forcing them to be suspended from active duty.

Abraham has been charged with allegedly helping a prominent graft convict receive a reduced sentence last year in exchange for political backing from the convict’s party to support Abraham’s alleged bid to become vice president.

In a separate case, the South Sulawesi Police have charged Abraham with document forgery after he allegedly falsified a document to help a woman, Feriyani Lim, apply for a passport in 2007.

Suspended deputy chairman Bambang Widjojanto is accused of compelling witnesses to commit perjury in a poll dispute that he handled as a lawyer in 2010.

But since the KPK handed over Budi’s case to the AGO, the police have eased up a little, with the deputy police chief, Comr. Gen. Badrodin Haiti, saying his office would end its investigations against all the KPK officials except Abraham and Bambang — in an apparent affirmation that the initial charges were trumped up.

“There will be no more [KPK officials] summoned [by the police]. If there are, I will reject them,” Ruki told Tempo.

Still, police have expanded their investigation to those who have come out in support of the KPK, including former deputy justice minister Denny Indrayana, whom police called in for questioning last week in yet another case seemingly dredged up out of nowhere — this one relating to an online payment system for passport applications set up by the ministry to help prevent graft.

Denny called the police’s investigation an effort to “criminalize an unprecedented technological innovation that works to prevent the practice of extortion.”

“[The investigation] also criminalizes the KPK and its supporters,” he added.

Police claim they have also received criminal complaints against former anti-money-laundering chief Yunus Husein, whose office unearthed the suspicious transactions in Budi’s accounts, as well as Tempo magazine, which has been outspoken in its support of the KPK.

The magazine was the first publication to report the suspicious transactions linked to Budi and several other police generals, in a controversy that came to be known as the “fat accounts” scandal.

The police have also threatened to suit the National Commission on Human Rights, or Komnas HAM, for declaring that it had found an indication of rights abuses in the police’s arrest of suspended KPK deputy Bambang in January. Police accuse Komnas HAM of violating the law by disclosing the results of its probe.

Although Joko eventually withdrew Budi’s nomination for police chief, the general continues to hold sway over the force.

In January, he saw one of his closest lieutenants, Budi Waseso, named the chief of detectives — the most important post in the force after that of the police chief — and last week saw another eight loyalists from the training academy that he oversees promoted to strategic positions.

Among them is Sr. Comr. Viktor Edi Simanjuntak, who the Indonesian Ombudsman has recommended to be sanctioned for his unauthorized involvement in Bambang’s arrest. Viktor now leads the police’s special and economic crimes directorate, which is handling Bambang’s case.