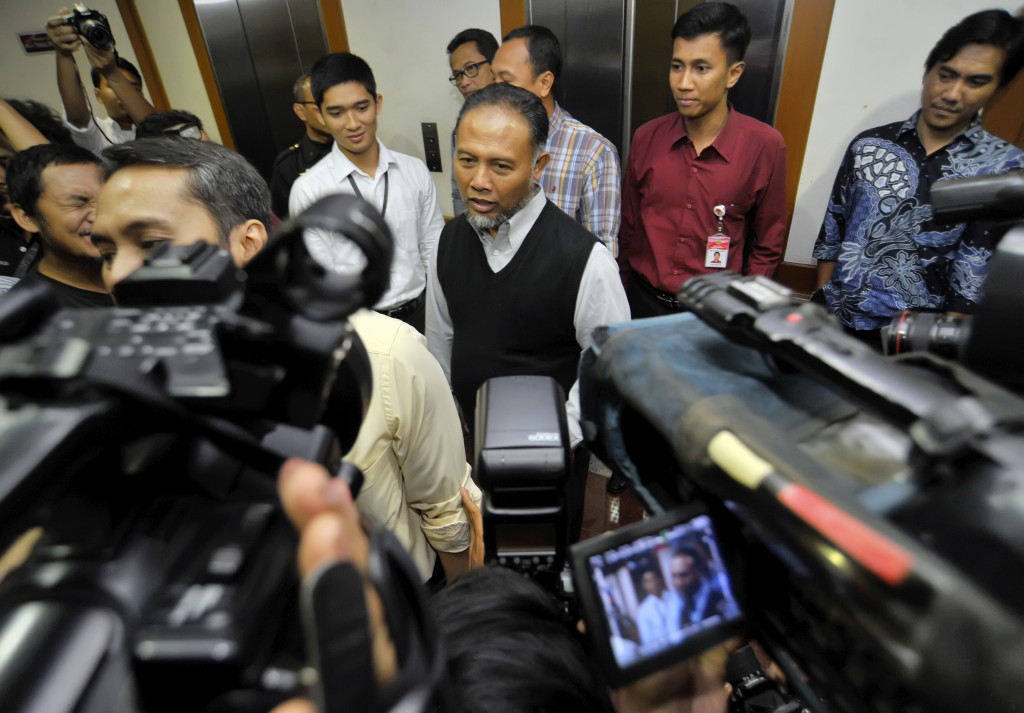 Indonesia’s police force claimed on Wednesday that it had already investigated irregularities in officers’ arrest of an antigraft deputy last month, saying they were a step ahead of a parallel probe by the Indonesian Ombudsman.

The Ombudsman on Tuesday recommended that police launch an investigation and reprimand two officers in connection with the Jan. 23 arrest of Bambang Widjojanto, a now-suspended deputy chairman of the Corruption Eradication Commission, or KPK.

Ronny added that police had already launched their own internal investigation into the circumstances of Bambang’s arrest.

He declined, however, to say whether the internal investigation had reached any conclusion.

“The police have been proactive in dampening the negative opinion built up by the suspect to obstruct the investigation against him,” Ronny said.

Bambang, who was arrested and detained for more than 15 hours on Jan. 23, is accused of compelling witnesses to commit perjury in an election dispute case that he handled as a lawyer in 2010.

The arrest — and subsequent criminal probes against other KPK commissioners — was widely seen as a retaliation by the police against the KPK for naming Comr. Gen. Budi Gunawan, a police chief nominee, a corruption suspect.

KPK officials allege that between 2003 and 2006, some Rp 54 billion ($4.2 million) in funds flowed through Budi’s personal bank accounts, and have charged him with bribery and money laundering.

Ombudsman commissioner Budi Santoso revealed on Tuesday that among the officers who arrested Bambang at his home, as he was about to take his daughter to school, was Sr. Comr. ViKtor E. Simanjuntak, of the National Police’s Education Institute (Lemdikpol), which Budi Gunawan currently oversees.

“The presence of Sr. Comr. Viktor E. Simanjuntak during the arrest was not warranted,” Santoso said.

Another irregularity was the presence of two heavily armed police officers, which the Ombudsman found to be “excessive.”

The case against Bambang is being handled by Daniel’s office.

The Ombudsman also recommended all officers involved in the arrest be investigated by the police’s ethics tribunal.

The National Police’s chief of detectives, Comr. Gen. Budi Waseso, who is currently overseeing 26 separate criminal probes against KPK commissioners and officials, said Bambang’s move to report his arrest to the Ombudsman showed that Bambang “knows nothing of the law.”

Bambang “claimed to be a man of the law, so why doesn’t he just file a pretrial motion? But that’s alright, that is [Bambang’s] right,” he said.

In a separate case, the South Sulawesi Police have charged Abraham with document forgery after he allegedly assisted a woman, Feriyani Lim, apply for a passport in 2007.

Adnan is accused of fraudulently acquiring shares in a timber company while advising it during an ownership dispute in 2006; Zulkarnain is accused of receiving bribes when he was chief prosecutor in East Java in 2009.

Meanwhile, senior KPK investigator Novel Baswedan is charged with abusing a prisoner during his time at the Bengkulu district police 10 years ago.

Budi Waseso is also gunning for 21 KPK investigators for illegal firearm possession, further cementing the notion that the police are indeed in a full-on witch hunt against the KPK.

Sticking it to the man

Bambang answered a summons for questioning by the police on Tuesday by showing up with a letter explaining his grounds for rejecting the summons.

In it, he argued the police had not given him the results of several witness examinations, which a suspect is entitled to by law.

Bambang’s team of lawyers also questioned additional charges filed against their client, while a third letter demanded that the police conduct a cross-examination between police, prosecutors and Bambang’s legal team.

Police spokesman Ronny said Bambang’s third demand “is out of the question.”

“We will reveal everything in court. We have been transparent about the investigation [to Bambang’s team],” he claimed.

Budi Waseso said his team was preparing a letter in response to Bambang’s objections and added that if Bambang was unhappy with the investigation against him, “he can take the matter to the [police’s] internal affairs division.”

Bambang was one of three lawyers representing Ujang Iskandar, who won the election for head of West Kotawaringin district in Central Kalimantan in 2010.

It was the losing district head hopeful, Sugianto Sabran, who first accused Bambang of compelling witnesses to commit perjury in a dispute of the results heard by the Constitutional Court. Bambang insists he never asked witnesses to lie in court.

Police dropped the case in 2010 after the Constitutional Court ruled in favor of Bambang’s client.

But just days after Budi Gunawan last month, the same case was reported again by Sugianto, now a lawmaker from President Joko Widodo’s Indonesian Democratic Party of Struggle, or PDI-P.

Budi was the security aide to PDI-P chairwoman Megawati Soekarnoputri during her time as president.

The police detectives unit’s special crimes division says it has drawn up a new list of possible suspects in Bambang’s case, but did not give any names.

However, a source familiar with the investigation told the Jakarta Globe on Wednesday that the new candidates were “Bambang Widjojanto’s colleagues” who also represented Ujang.

Bambang worked with lawyers Iskandar Sonhadji and Hermawanto during the election dispute in 2010.

The pair were reportedly aware that the police planned to target them and requested assistance from the Indonesian Advocate Association (Peradi) in January.

“I was only helping the witnesses in trial simulation; all the material was from Ujang’s campaign team,” Hermawanto said. “I don’t know whether the statements were true or false.”