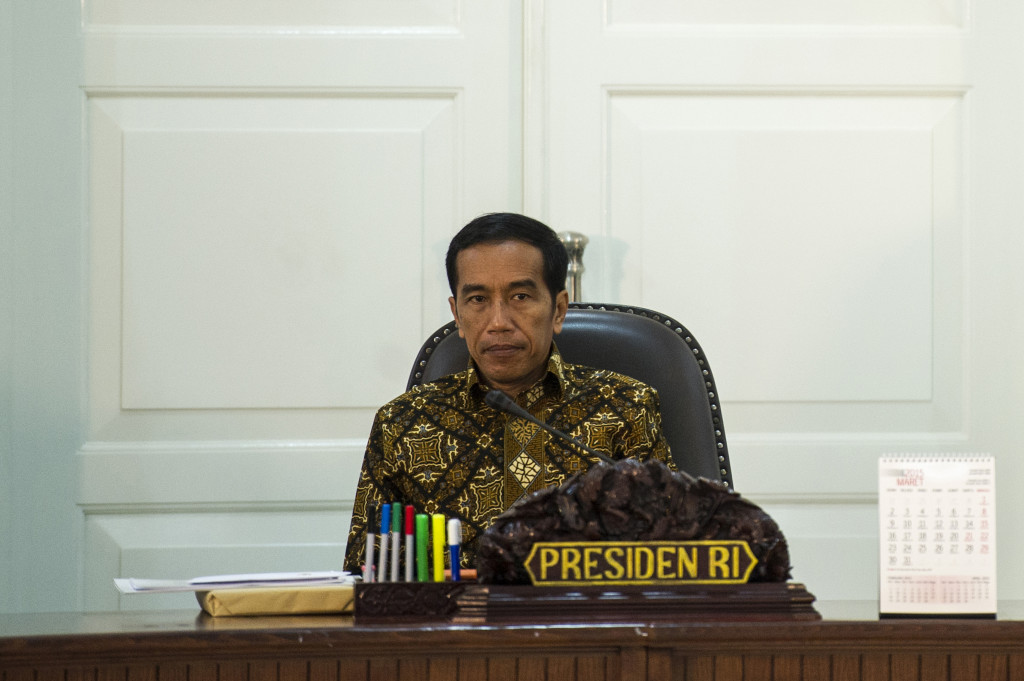 President Joko Widodo will decide next week whether to stick with his controversial pick for police chief or drop the nomination entirely, following a meeting with leaders of the parties backing his administration.

“I will finish everything next week,” the president told reporters in Jakarta on Wednesday in reference to the crisis that has erupted over his nomination of Comr. Gen. Budi Gunawan, a graft suspect, to become Indonesia’s new police chief.

Joko previously said he had delayed inaugurating Budi, who is charged by the Corruption Eradication Commission (KPK) with bribery and money laundering, but emphasized that he was not withdrawing the nomination.

Whether he finally decides to do so will have to wait for next week, he said.

“It wouldn’t be long. There are things I must sort out first,” Joko said, declining to say what those things might be.

The president’s latest remarks on the matter followed a meeting on Tuesday night that he hosted with the leaders of his six-party Awesome Indonesia Coalition (KIH), including his political patron, Megawati Soekarnoputri, the chairwoman of the Indonesian Democratic Party of Struggle (PDI-P).

Budi served as Megawati’s security aide during her presidency from 2001 to 2004, and is widely believed to have been foisted onto Joko for the post of National Police chief by the PDI-P chief.

Noticeably absent from the meeting was National Democratic Party (NasDem) chairman, Surya Paloh, a key figure in the KIH who has always been present before Joko makes important decisions and appointments and is also a known supporter of Budi’s.

Joko said the meeting was called to discuss the Budi quandary, which has seen the police go into apparent retaliation mode against the KPK by digging up cold cases —some dating back a decade — to pin against the antigraft body’s four commissioners.

“I don’t feel I need to hide anything,” Joko said, adding that the meeting “was about the KPK and the National Police.”

Joko continues to face a massive public outcry to scrap Budi’s nomination and end the police’s blatant criminalization of the KPK leaders, even as PDI-P and NasDem officials pile on the pressure for Budi to be sworn in immediately.

“There are certain elites who want to see [Budi] become the police chief,” Hamdi Muluk, a political psychology professor at the University of Indonesia, told the Jakarta Globe on Wednesday. “We can identify these elites as being from the PDI-P and NasDem.”

Joko, he added, “doesn’t actually want Budi to become the police chief. But his power is limited, given the fact that he’s not a party leader.”

Hamdi said that severing ties with the KIH would leave Joko exposed to opposition Red-White Coalition (KMP), which controls the majority of seats at the House of Representatives.

But a surprise meeting last week between Joko and KIH leader Prabowo Subianto, whom Joko defeated in a close and bitterly contested election last year, has helped ease the pressure for Joko to proceed with inaugurating Budi, Hamdi said.

Cabinet Secretary Andi Widjajanto, one of Joko’s closest advisers and branded a “traitor” by the PDI-P for urging the president to stay Budi’s appointment, confirmed that Joko was “considering the risks” of whatever decision he would make.

“In total there are six options,” he said.

The first, Andi said, is for Budi to withdraw from the process; the second is to go ahead with inaugurating Budi; the third is for Joko to inaugurate and then suspend Budi; the fourth is to wait for a legally binding court ruling on Budi’s bribery case; and the fifth is to scrap Budi’s nomination and come up with a new nominee.

“The last option is to stay with the current conditions while making new [political] calculations,” Andi said.

He added the president was scheduled to go oversees this week and would only announce his decision next week.

“The president has some idea about what he plans to do,” Andi said, but would not disclose which way he was leaning. He added that the decision could change if there were new developments during his trip abroad.

State Secretary Pratikno, another member of the president’s inner circle, had suggested on Tuesday that the neatest solution would be for Budi to withdraw from the process to be named police chief — a move that he said carried little political and ethical consequences for the president.

But Andi said the president has hinted at this “several times” to Budi, to no avail.

“He’s still waiting for his pretrial hearing to conclude,” Badrodin said on Wednesday, referring to Budi’s motion to have the charges brought by the KPK quashed, citing improper legal procedures.

“Hopefully the pretrial process will wrap up soon so [Budi] can decide whether he should back down or not.”

However, legal experts contend that even if he succeeds in his pretrial motion, the court’s decision would only mean the KPK would have to restart its investigation process — and not that he would go scot-free.

Syafii Maarif, the chairman of a nine-man team set up by Joko to advise him on the matter, said the president would likely scrap Budi’s nomination and find a new candidate for police chief.

“Last night, Jokowi called me and expressed his decision to not inaugurate [Budi] as police chief,” Syafii said on Wednesday in Yogyakarta as quoted by Kompas.com.

Joko last week met with members of the National Police Commission, the panel tasked with vetting potential candidates. The commissioners later said Joko had consulted with them on potential candidates, but that no decision was made during the meeting.

Pratikno, however, refuted Syafii’s claim: “There has been no decision at this time,” he said.

Whatever decision the president announces will be supported by the PDI-P’s Megawati, said party stalwart Pramono Anung.

“We will not intervene,” he said on Wednesday, adding that neither Megawati nor any other PDI-P official had forced Joko to nominate Budi for police chief.

However, Pramono said the party still held out hope that Budi would be inaugurated.

“Budi has already gone through the confirmation process at the House. If there is a legal problem then the legal system should sort that out,” he said.

But mounting criticism of Joko from within the PDI-P’s ranks suggests that Megawati and Joko don’t see eye-to-eye on the issue.

PDI-P politician Effendi Simbolon, who called Cabinet Secretary Andi a traitor, also threatened to launch impeachment proceedings against the president if he refused to inaugurate Budi.

That Megawati would allow such a high-level official from her party to make such a statement without a word of protest is a strong indication that she endorses the stance, political analysts say.

Megawati’s rule has gone unchallenged since she founded the PDI-P in 1999, with analysts pointing out that she imposes a tight grip on all PDI-P members — including Joko, who for weeks before his nomination in last year’s election insisted that it was up to the chairwoman whether he ran for president.

PDI-P legislators at the House have also threatened retribution should the graft suspect Budi Gunawan not be named police chief.

“If the president goes ahead with the inauguration, there will be no problem from the party officials at the House,” said Junimart Girsang, a PDI-P legislator.

“But if not, then our leaders at the PDI-P will likely support him but not necessarily the PDI-P team [at the House]. We will take our own stance. The PDI-P’s central board has given the House team great independence, as long as the public interest is at stake.”