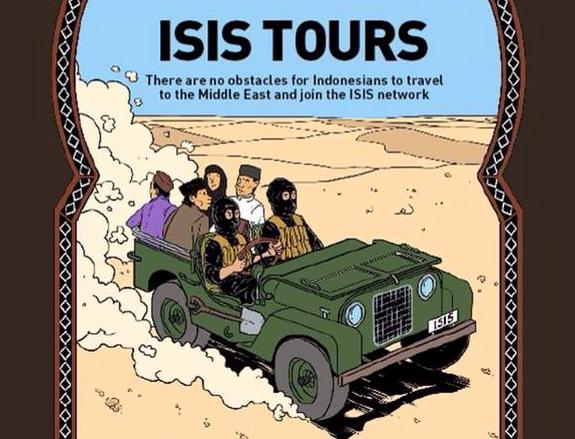 The government and the House of Representatives have agreed to work on an amendment to the Antiterrorism Law to beef up measures against the threat from the Islamic State (IS) group, which is looming ever larger over the country.

The House and the government have yet to discuss details of the plan, but Coordinating Political, Legal and Security Affairs Minister Tedjo Edhy Purdijatno said that amending the law was urgent to deal with the “operations of the Islamic State”.

On Wednesday, Tedjo and Home Minister Tjahjo Kumolo formally made the proposal to the House during a closed-door consultation meeting on Wednesday.

The National Counterterrorism Agency (BNPT) earlier said that the recruitment of IS fighters from Indonesia had jumped significantly between June and October last year, estimating that 514 Indonesians had gone to Syria and Iraq to fight with IS.

“This is important because this concerns the growth of the Islamic State, which is getting worrisome. We should anticipate this and there should be a strong legal framework,” Tjahjo said.

Tedjo declined to confirm if details in the amendment would include a provision that would allow the immigration office to revoke the passports of those who went to fight with the IS movement abroad and whether it would also regulate measures to prevent dissemination of radicalism over the Internet.

The minister said only that the amendment would cover issues unaddressed by the existing Law No. 9/2013 on the prevention and eradication of terrorism.

“The amendment could be used to eradicate all forms of radicalism,” he insisted.

Tedjo said that the amendment would also entail severe punishment for terror convicts.

Law and Human Rights Minister Yasonna H. Laoly has floated a plan that would allow the government to revoke the passports of those who fought with IS abroad.

Tedjo earlier suggested it was easier to issue a government regulation in lieu of law (Perppu) to adopt such a mechanism, while Yasonna said it was better to revise the Antiterrorism Law because no existing legal framework allowed the government to revoke their passports.

“We can’t revoke their passports because we have no legal framework,” Yasonna said on Monday.

The House, however, is not expected to immediately begin the deliberation on the antiterror law amendment, as it is still preoccupied with ending its internal conflicts, which involve several factions including the Golkar Party, the second-largest faction.

The plan to prevent Indonesians joining IS abroad has a precedent. In August last year, Tedjo’s predecessor Amir Syamsuddin and the BNPT considered stripping the citizenship of those who went to fight with IS abroad. At that time, Amir said that in previous cases, Indonesians who joined militant or terrorist groups had had dual citizenship with countries such as Malaysia and Singapore.