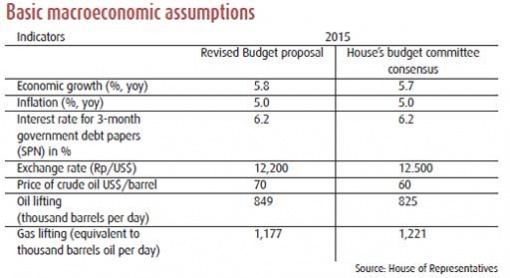 The government and lawmakers have set the temporary revised state budget for 2015, in which the government will obtain additional funds for state spending.

The posture was approved during a House of Representatives’ Budget Committee meeting on Friday.

According to the temporary revision, there will be an additional Rp 20.9 trillion (US$1.66 billion) of spare funds, generated from lower state expenditure.

“This year we are anticipating lower state revenue resulting from lower PNBP [non-tax revenues], but we are also expecting an even lower decline in state expenditure following the reduction of fuel and electricity subsidies,” Finance Minister Bambang Brodjonegoro told lawmakers.

The development shows that state revenue is estimated to reach Rp 1.76 quadrillion in 2015, lower than the Rp 1.77 quadrillion stated in the revised state budget draft.

“The latest situation in the oil and gas sector will lead to a decline of up to Rp 14.27 trillion in oil and gas PNBP. We are completely aware of that. We will see a decline in the PNBP of our domestic market obligation as well,” he added.

On the other hand, the government is looking to see expenditure fall to Rp 1.98 quadrillion from Rp 1.99 quadrillion.

A significant reduction of expenditure is listed in the energy subsidy segment, comprising fuel and electricity. While the fuel subsidy will fall by Rp 17.1 trillion, the electricity subsidy will decrease by Rp 3.5 trillion.

In domestic financing, Bambang said the government and lawmakers had also agreed to slash the target of this year’s securities issuance to Rp 299.3 trillion from Rp 308.3 trillion.

“In the end, the amount of the extra funds will grow to a total ofRp 29.5 trillion,” he added.

The government will meet with the Budget Committee on Monday to discuss the fund use in more detail.

However, Bambang has proposed allocating the extra funds as additional expenditure for ministries and agencies, as regional fund transfers and to reduce budget deficit.

This year’s deficit is set at 1.92 percent of gross domestic product.