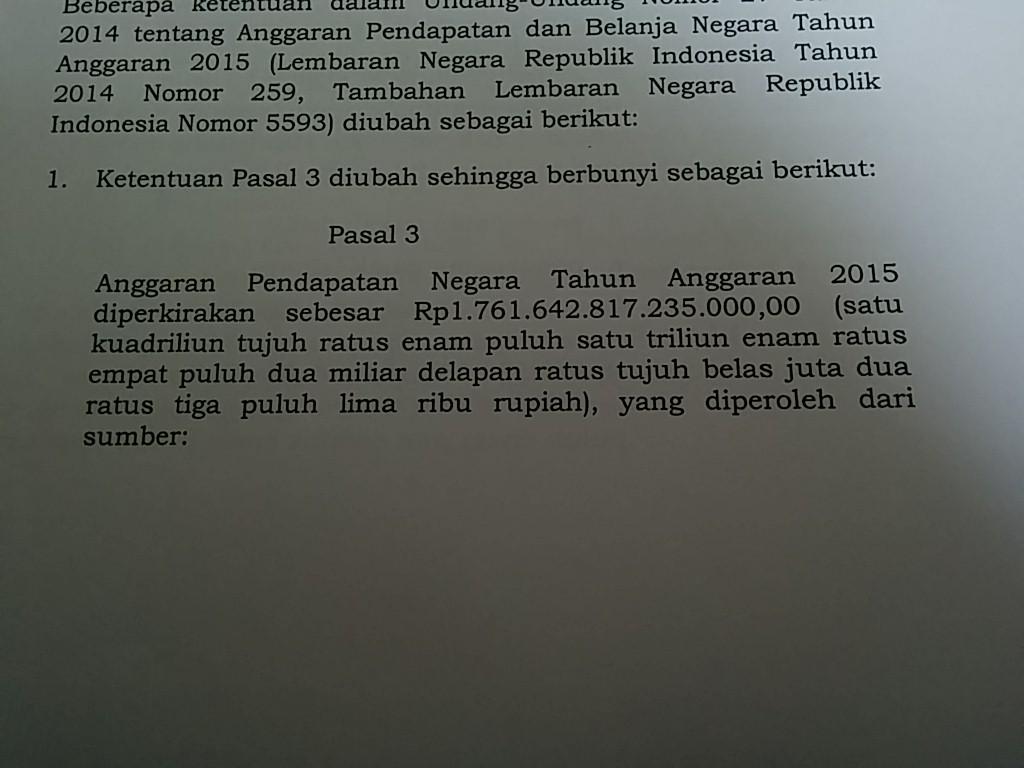 President Joko “Jokowi” Widodo is inching closer to receiving approval from the House of Representatives for his reformist state budget, despite having a minority in the House and being in the midst of a standoff with elite figures in his own political alliance. Budget revision or APBNP2015 approximately Rp 1,984 trillion for spending and Rp 1,761 trillion on income.

After a month of deliberation, the revised 2015 budget will be submitted to the House plenary session for approval on Friday before the House starts a month-long recess on Feb. 18.

Lawmaker Ahmadi Noor Supit, the head of the House budget committee, said on Thursday that the House had scheduled the budget to be passed on Friday.

“There is no longer any major issue that can delay the approval. The government has reached an understanding with us,” said Ahmadi of the Golkar Party, the most populous party in the opposition camp.

The overhaul of the fuel subsidy allocation in the state budget will have the most far-reaching impact, as it brings to an end an unproductive practice that had survived for more than three decades.

As the House has agreed to the drastic cut in the subsidy, the government will receive additional funds of around Rp 195 trillion (US$15.2 billion) this year, allocated mostly to infrastructure.

As of Thursday evening, the Public Works and Public Housing Ministry will receive the biggest budget ever recorded in the country with Rp 116.8 trillion, up by Rp 32 trillion compared to the original 2015 budget arranged by the previous administration of former president Susilo Bambang Yudhoyono.

Most of the additional funds will be allotted to infrastructure to support food production and road networks.

Jokowi has prioritized increasing agricultural output to achieve self-sufficiency in rice, soy, corn and sugar in the next three years. The Agriculture Ministry will receive Rp 32.7 trillion, up by Rp 16.9 trillion in the original budget.

Facing the country’s notorious logistics, the Transportation Ministry is the second-largest recipient of the additional funds. The ministry will receive Rp 64 trillion, up by Rp 20 trillion. Most of the funds will be used for the construction of railways and seaports.