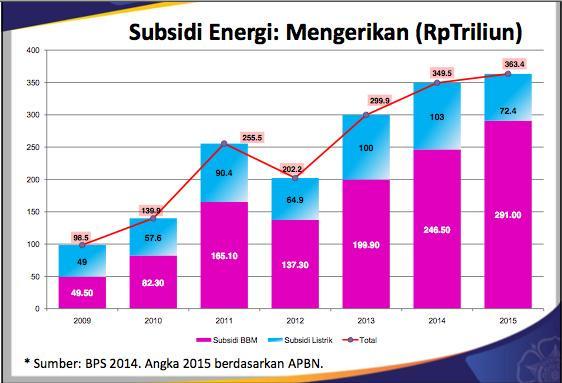 The House of Representatives has lowered the subsidy proposed by the government for the sale of biodiesel, saying that the required amount was too high.

The Energy and Mineral Resources Ministry allocated about Rp 17.4 trillion (US$1.4 billion) to subsidies in the sale of biofuel so that producers of renewable energy such as fatty acid methyl ester (FAME) and ethanol used in biofuel can continue their operations despite the sharp drop in oil prices.

However, in the deliberation of the proposed revision to the 2015 State Budget on Wednesday, House of Representatives Commission VII overseeing energy cut the allocation to Rp 6.8 trillion. With the amount approved by the legislators, the subsidy for biodiesel is lowered to Rp 4,000 per liter from Rp 5,000 per liter as proposed by the government, while the bioethanol subsidy is fixed at Rp 3,000 per liter in line with the proposal.

FAME made from crude palm oil and ethanol are, respectively, used in BioSolar diesel and Bio Pertamax gasoline sold by state-owned oil and gas company Pertamina.

In late 2013, the government implemented the mandatory blending of 10 percent of biofuel, mainly made of crude palm oil, into diesel oil and up to 1 percent bioethanol into gasoline as part of attempts to reduce the countrys ballooning imports of petroleum products. Withthe sharp drop in crude oil prices in recent months, the use of crude palm oil in biodiesel is no longer economically viable.

With the proposed higher subsidy, the government is hoping FAME and ethanol producers will continue their business despite the fall in crude oil prices, leading to a drop in the prices of these renewable energy products.

Despite the lower approved subsidy, the new pricing formula means the business activities of FAME and ethanol suppliers should remain economically viable, according to the Energy and Mineral Resources Ministrys director general for renewable energy, Rida Mulyana.

Under the new formula, the biodiesel price will be linked to the price of crude palm oil (CPO) instead of to the diesel price, which is usually benchmarked on the MOPS (Mean of Platts Singapore).

Rida said that private players, including big foreign players such as Shell, had been waiting for a decision on the formula. He added that Shell was planning to develop a biodiesel terminal in Pulau Laut in Kalimantan to comply with the governments mandator) mix policy.

Rida said his office would continue to attract and force private players to blend their products with biodiesel and bioethanol.

"We will conduct monthly evaluations and directly verify the realization," Rida said.

"The government has also proposed to provide subsidies for non-subsidized biodiesel, but we do not agree," Commission VII head Kardaya Warnika said.