(Jakarta Post) Meutya: We will keep working for the commission we were previously assigned to 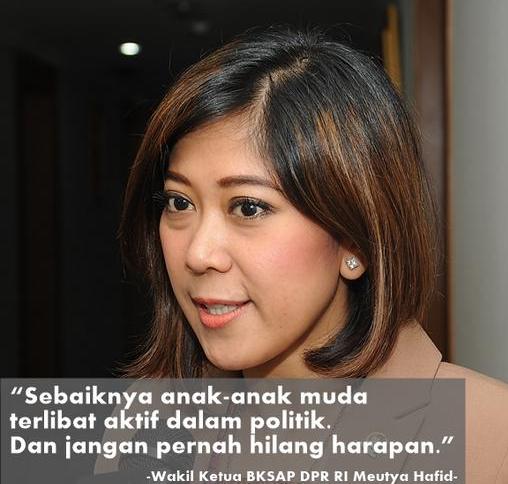 After surviving months of infighting due to a political struggle between the ruling and opposition coalitions, the House of Representatives will likely face another hurdle in carrying out its legislative duties after a group of Golkar lawmakers refused to obey reassignments at the House from leaders of one faction of the party.

Golkar, which controls 91 of the 560 House seats, has been embroiled in a leadership dispute since late last year, after former deputy chairman Agung Laksono and his camp questioned the legitimacy of a national congress led by then incumbent chairman Aburizal Bakrie in Bali.

After securing recognition from the party’s dispute tribunal, Agung’s chairmanship was confirmed by Law and Human Rights Minister Yasonna H. Laoly on March 23.

Although Aburizal’s camp has challenged Yasonna’s decision at the Jakarta State Administrative Court (PTUN), Agung has continued to exert control of the party, submitting a list of lawmakers to replace Aburizal-supporters who hold leadership positions at the House.

In response to Agung’s move, Ade and Bambang last week sent a letter about the sudden job rotation — which involves dozens of Golkar lawmakers — to House leadership, leaving many of Agung’s supporters stripped of posts on strategic House commissions and bodies.

Inter-Parliamentary Cooperation Body (BKSAP) deputy chief Meutya Hafid, meanwhile, is on the verge of losing her leadership position in the House body after Ade and Bambang called for her removal, along with several other lawmakers, including Fayakhun and Dave.

In an interview with The Jakarta Post on Wednesday, Meutya said some 50 Golkar lawmakers had been abruptly reassigned, with most identified as “Agung supporters.”

“We will not follow the instruction and will keep working for the commission we were previously assigned to,” she said.

“We have explained our hearing schedule to them. Whether they come or not is up to them,” he said.

Bambang, meanwhile, has repeatedly defended the rotation as a regular tour of duty, saying the party needed to strengthen the performance of particular House commissions with support from experienced lawmakers.

“There is no problem [with the rotation]. There is also no need to relate it to the suppression committed by the law and human rights minister to the Aburizal’s camp by recognizing the Agung camp,” he said.
____________________

“We will not follow the instruction and will keep working for the commission we were previously assigned to.”