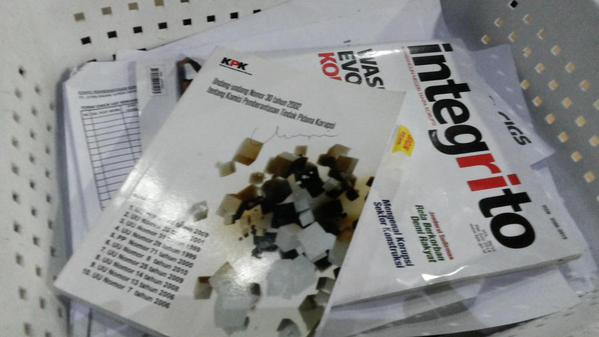 The Corruption Eradication Commission (KPK) on Thursday warned President Joko "Jokowi" Widodo that his indecisiveness in solving the current standoff between the antigraft body and the National Police had put it at risk.

The KPK leadership is in threat of total paralysis as all of its commissioners are now facing criminal charges - in which one of them has been declared a suspect by the police - following the commissions decision to name National Police chief hopeful Comr. Gen. Budi Gunawan a bribery suspect on Jan. 13.

The police have named KPK commissioner Bambang Widjojanto a suspect for encouraging perjury when he was lawyer back in 2010, while the police are currently collecting evidence to charge three other commissioners - Abraham Samad, Adnan Pandu Praja and Zulkarnain - after receiving reports on their alleged past wrongdoings prior to serving as commissioners.

Johan called on Jokowi, who he said had so far maintained a standoffish stance to the crisis, to stop the criminalization of the KPK leaders.

"[The inaction] has badly hurt the KPK and the public must know what impact the standoff could have on hundreds of graft cases that we are currently handling," Johan said.

According to Article 32 of Law No. 30/2002 on the KPK, any commissioner named a suspect in a criminal case must automatically be suspended from their post.

Johan further said that if ail KPK commissioners were named suspects and resigned from their posts, Jokowi must take responsibility.

"If a total paralysis does happen, then the option that we will take is leave [the KPK] and return the mandate to the President. Whats the point of staying if our the President does nothing to protect the KPK?" Johan added.

Many are convinced that the attacks against the antigraft body from the National Police, which were launched in lockstep with the Indonesian Democratic Party of Struggle (PDI-P), were designed to prevent the KPK from ramping up its investigation into the Bank Indonesia Liquidity Assistance (BLBI) scandal which could have links to PDI-P chairperson Megawati Soekarnoputri in her capacity as president be-tween 2001 and 2004.

The PDI-P has denied the allegations, saving the recent maneuvers of the partys acting secretary-general Hasto Kristiyanto, including his disclosure of Abraham having helped PDI-P lawmaker Emir Moeis get a lenient sentence in a graft case last year in return for the partys support for his position as a potential running mate for Jokowi, were personal in nature.

The PDI-P could also be seen as being complicit in the National Polices move against Bambang.

The police declared Bambang a suspect in a perjury case after receiving a report from PDI-P politician Sugianto Sabran.

Bambang was named a suspect for encouraging perjury in a local election dispute adjudicated at the Constitutional Court in 2010.

On Wednesday, House of Representatives Commission III overseeing law and human rights summoned Hasto to clarify his allegation that Abraham had breached the KPKs leadership ethics by holding a series of secret meetings with PDI-P figures to discuss his political ambitions.

Johan slammed Hasto for his campaign against Abraham, saying that he should have presented evidence to the KPK on the alleged code of ethics violation, instead of going public with the claim.

At the hearing with the House, Hasto also displayed photos of Abraham in a compromising position with a woman.

"We are currently investigating the allegations of ethics code violations and we regret the fact that until today Hasto has failed to show us strong evidence for his allegations," said Johan.

Meanwhile, Law and Human Rights Minister Yasona H. Laoly, who is a former PDI-P politician, said on Thursday that if the KPK suffered a total paralysis, Jokowi would issue a government regulation in Heu of law (Perppu) that would enable him to appoint interim KPK commissioners until the tenure of the current leadership ends in December.

"We have an option to expedite the selection of new KPK commissioners, but it is better to appoint acting commissioners," Yasona said on Thursday.