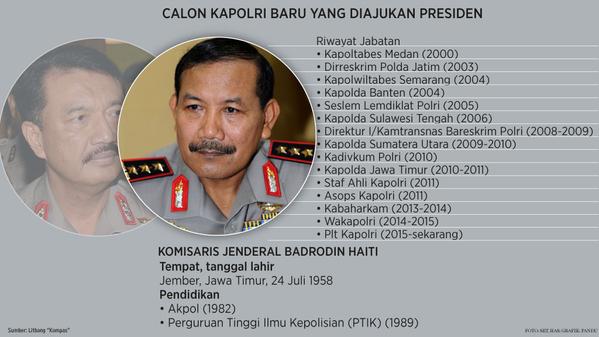 Comr. Gen Budi Gunawan, whose candidacy as the National Police Chief was cancelled, has been reportedly nominated as one of candidates for deputy chief of the national police.

"Candidate of national police deputy chief must be a three-star general and has filled a number of positions. So Budi Gunawan is on the list,” said Head of Public Relations Division of the national police headquarter Inspector General Ronny F. Sompie to Tempo on Friday.

President Joko Widodo previously said that Budi Gunawan still wanted to give his contribution at the police although his candidacy as the national police chief has been cancelled.

However, the President has yet to determine the position for Budi.

Budi’s lawyer Fredrich Yunadi said Budi could be appointed as the deputy chief. He also said that the candidacy of Budi has been discussed at Rank and Position Council meeting, which was led by the current national police deputy chief and Budi is on the list, along with Dwi Priyatno and Putut Eko Bayu Seno.

In the meantime, Coordinator of the Indonesian Corruption Watch Ade Irawan expressed his disappointment for the candidacy of Budi Gunawan as Deputy Chairman of the National Police.

According to Ade, it would be better if Budi’s position at the police is determined after his legal case is finished.