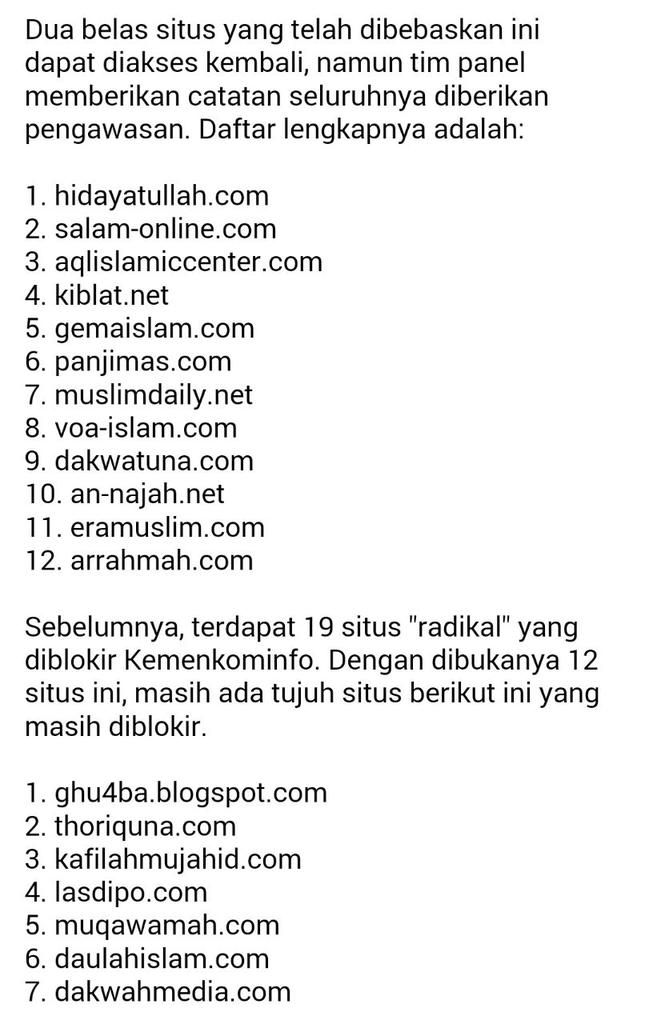 An Islamic organization in Indonesia has urged the government to block menacing websites that have not yet been detected by a panel recently set up for the purpose.

"We can see several websites that are dangerous and have the potential to spread radicalism, such as the ideology of Islamic State in Iraq and Syria (ISIS), but they have not yet been blocked. They must immediately be blocked," the deputy general chairman of the executive board of Nahdlatul Ulama (PBNU), Asad Said Ali, said here on Friday.

He made the request during a discussion, "Effectiveness of Blocking Radical Websites in the Fight against Terrorism," on the Bhayangkara Jaya Raya University campus in Jalan Dharmawangsa, South Jakarta.

"They carry radical contents and even give lessons on how to make bombs; this indicates they are closely linked with ISIS, but they have been ignored," he explained.

He remarked the PBNU supported and appreciated the National Counterterrorism Agency (BNPT) and the Ministry of Informatics and Communication for blocking 19 websites that were believed to be spreading radicalism.

"I hailed the blocking of 19 websites. That was good. There must be more firm actions, and with regard to protests by the operators of 12 of the 19 websites, it is alright as remedial steps can be taken, such as that by Dakwatuna.com belonging to the Prosperous Justice Party," he stressed.

Asad observed that several websites that support ISIS have addresses and clear operators, so the BNPT and the Ministry of Informatics and Communication must take firm actions against them.

"To me, criteria for blocking a website include their operators and contents. If, for example, the content of a website belonging to NU helps ISIS, then NU must be reprimanded. However, if the ownership is affiliated to ISIS, then the website must be blocked straightaway," he noted.

Asas pointed out that ISISs ideology is a threat not only to Indonesia but also to the world.

He emphasized that ISISs ideology is not Islamic because it propagates hatred against other human beings, even Muslims belonging to different sects.

Meanwhile, the government has lifted restrictions on 12 out of the 19 Islamic websites that were blocked recently for allegedly promoting radicalism.

After the Forum for Handling Websites carrying Negative Contents (FPSIBN) conducted a meeting on terrorism, SARA (ethnicity, religious, racial and group), and hate issues here on Thursday, the deputy chairman of the FPSIBN, Agus Barnas, said the operation of 12 websites will be normalized, but they will be under supervision.

"We are restoring only 12 out of 19 blocked websites because only their operators communicated with the forum and that showed their goodwill, besides a dialog that has happened with them regarding the importance of maintaining the integrity of the Unitary State of Indonesia," he stated.

Tedjo Edhy Purdjiatno, Coordinating Minister for Political, Legal and Security Affairs, underlined the importance of being aware of the Islamic State of Iraq and Syria (ISIS) influence in social media. "The spread of ISIS's ideology is the most dangerous," Tedjo said on Friday, APril 10, 2015.

Efforts to curb ISIS influence have been carried out by blocking dozens of websites that contains values related to radicalism. "Please note that [the websites] are not being shut down," Tedjo said, adding that the block would be lifted if the websites contents have been changed.

Tedjo said that the government will continue to monitor citizens going abroad, especially those who have been suspected of being influenced by ISIS's teaching.

The East Java Police once released intelligence data that recorded that there were 79 people who had joined ISIS, including four people who were captured by the Special Counter-Terrorism Unit Densus 88 in Malang and Tulungagung last month.

According to Tedjo, the government will involve all religious and public figures to stop the spread of ISIS's teachings.