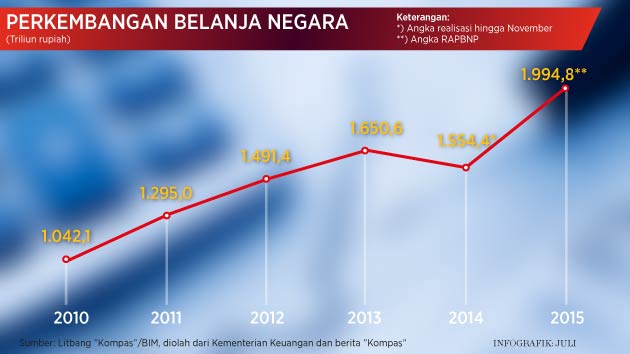 TEMPO.CO, Jakarta - The government will increase the budget allocation for infrastructure development in 2016. The budget will be twice this year's allocation.

Andrinof Chaniago, head of the National Development Planning Agency, said the budget raise was based on the increasing number of infrastructure projects.

"[The budget raise] is to support programs that will be focused on the maritime, food, energy, and tourism sectors," he said in Jakarta yesterday.

According to Andrinof, in addition to the four sectors the government will also target development programs in border regions.

This year the government is allocating Rp290.3 trillion for infrastructure development divided to three ministries. This figure is equivalent to 20 percent of the total state budget, which is around Rp1.98 quadrillion.

Infrastructure budget for the Ministry of Public Works and Public Housing is Rp105 trillion. The Transportation Ministry was allotted Rp52.5 trillion, while the Ministry of Energy and Mineral Resources got Rp5.9 trillion. Other ministries and institutions received Rp46.4 trillion.